Home/News /Dragoljub Zamurović: Urban and Natural are not at War

Dragoljub Zamurović: Urban and Natural are not at War

Urban and natural laws must be in harmony. But what has been happening here for the past decades is far from urbanization. Chaotic and unplanned construction of anything and everything is the main culprit for the situation we’ve been dragged into, warns famous Serbian photographer Dragoljub Zamurović.

Dragoljub Zamurović is a famous Serbian photographer with a passion for capturing the delicate play and the fusion of nature and the societies that develop and grow in it. Known by the alias Art Zamur, he has been collaborating with the French agency Gamma Presse Images since 1988, through which his photographs have reached the world’s largest magazines Time, Newsweek, The New York Times Magazine, Stern, Paris / Match, Figaro Magazine, Geo, Europeo, National Geographic, etc. 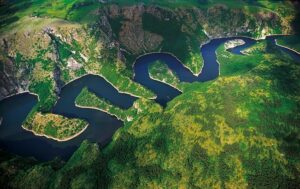 During your career, you walked, drove, and flew over Belgrade and Serbia and undoubtedly recorded the chronology of all changes. Is there strife between the urban and the natural, and who is winning on which front?

– Urban and natural laws must be in harmony. But what has been happening here for the past decades is far from urbanization. It is just the opposite of that process. Chaotic and unplanned construction of anything and everything is the main culprit for the situation we’ve been dragged into.

Since Belgrade is one of the four pilot cities on the euPOLIS project, how would you describe the changes from the moment you came to the city until this moment?

– I remember that a professor in the third year of architecture told us about an example from Sweden. They demolished an entire poorly planned settlement because they concluded that it was cheaper to tear it down than keep it as it is. Sustention of such a settlement would be much worse and more expensive for society than demolition. Of course, this was possible in wealthy Sweden. Who will make the call here and now to demolish half of Vracar or the whole of Kaludjerica (one downtown and one uptown municipality of the City of Belgrade)? Or, one example from the time after the Second World War – the settlement of Zeleznik was built with many comfortable apartments. When the people from the south of the country, coming from incomparable conditions and lifestyles, moved in, it was unimaginable for many to live under the same roof where the toilet is. In the next few years, when a commission came to check on the apartments, they witnessed that all the parquet was pulled and chopped up and used for lighting fires, toilet bowls were removed and used for some other purposes, the woodwork was devastated… Long story short, the people who moved in were not culturally prepared for the use of such dwellings. And after a few decades, when we have finally reached the appropriate level of awareness and education, there was total disintegration of the system with the destruction of the state by civil wars.

The government does not pay any attention to knowledge at all, and everything is collapsing to the extreme. They are not interested in a healthy environment. Enriching a narrow circle of closely related people is becoming a priority.

How do you feel walking through Belgrade?

– Ten years ago, I published a photo-monograph “My Belgrade”, which I shot for several years. Back then I felt the breath of change. Something was starting to arouse and stir in this city again. And today? Today, I do not feel any desire to walk the streets in my city. Rundown sidewalks, ugly fountains, lampposts covered with small advertisements, graffiti-covered facades, the smell from the small passages around Knez Mihailova Street. The air in Belgrade has become life-threatening. It is no longer a good place to live.

Dusko Radovic used to say that just waking up in Belgrade is reason enough for joy, but a lot has changed since his time. What is your dream-Belgrade you would like to wake up in?

– Some time ago, I visited my son who was studying in a small Dutch town. Greenery with bicycle and pedestrian paths ran through the whole city, so you had the impression that you were in a garden, not in the city. However, there were all the necessary public institutions, schools, a theater, a huge library, etc. There were small decorative fountains everywhere, lakes, a large number of small sculptures between which swans and some other birds walked. I don’t know if it would be possible for Belgrade with such a large number of inhabitants to look like that, but it would certainly be nice to do something similar.

You have made a good part of your opus from a perspective that is not naturally available to humans. Was the making and patenting of your first aircraft perhaps a subconscious need to show this contrast of nature against urban environments?

– I flew all kinds of aircraft: a motor kite, a helicopter, various planes, balloons, etc. I combined a single-seater balloon with a paraglider engine. It allowed me to fly, not only wind-driven but in all directions. I am happiest when I rise above uninhabited surfaces and observe the intertwining of fields of various colors with some water surface. The settlements are certainly not that interesting, especially from a bird’s eye view. It shows you clearly, all the ugliness that is piled up around the buildings, as well as all the junk on the roof terraces 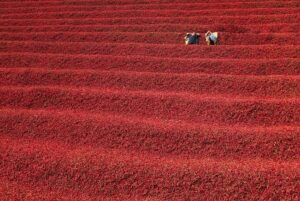 And as someone who spent so much time in nature, walking and flying, what did you get “there”, and what with each return to the city?

– Every day that I do not spend in nature, even partially, is a day lost for me. Going to nature is like breaking free from some shackles. I can freely draw a deep breath, let my gaze into the distance. Since I usually walk in the surrounding fields of Vojvodina, everywhere around and above me is a vast sky which means so much to me, and when it’s stuffed with some crispy-white clouds…

A thundering storm and bolts of lightning twirling across the skies are also fun, but flying is out of option then. When my batteries are fully recharged, I return to the city that provides me with comfort.

As an artist who records a specific combination of nature and tradition (which is always in harmony with the nature of a region), what is it that we have lost forever?

– Unfortunately, a lot. I recently edited old slides and came across a series of photos I took in the Macedonian region around Mavrovo Lake. The Mijaci lived there. They were an old Serbian tribe that immigrated there from Albania. Their beautiful costumes, customs, and architecture delighted me. And then I saw Branko Stanković’s show “Squaring of the Circle” on the YouTube channel, which he recorded two years ago, I was scandalized when I found out that they no longer exist. It was a really big shock for me. The disappearance of such beauty is a great shame for our generation that allowed it.

Where do you see the solution, and do you believe we can bring nature back to the cities?

– It all depends on the people whose job it is to decide on that. Unfortunately, with these people in power (not only in our country but also in many other countries), it is very hard to do anything. The lack of basic culture and the understanding that the common good is always more important than the personal can not bring a brighter future to our cities. Instead of returning nature to cities, we have examples of the daily destruction of everything green. I read somewhere about the law that passed in America more than 150 years ago. Apparently, for every tree cut down, three new ones have to be planted. The result is that there are more forests in America now than before. I can’t claim that this is accurate data, but if so, then it might be a way to go. 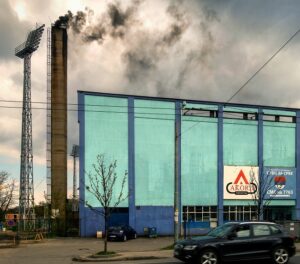 The development of technologies contributes to the increased use of natural resources, it also creates a lot of waste because the technology also becomes obsolete very quickly. Is technology our ally in this fight?

– If we use technology wisely, then it is a great ally. Unfortunately, here and in many other poor countries, technology only serves to enrich individuals at the expense of natural resources.

On the other hand, you have traveled the world. From what you saw, how are these processes and relations between the urban and the natural, being handled elsewhere?

– Well, as in everything else, it all depends on the state of consciousness in a specific country. In the more developed countries of Western Europe, especially those in the north of the continent, great attention is paid to this relationship. The saying “The further south (you go), the sadder (it gets)” (Serbian proverb) here reaches its full meaning.

Where in the world did you come across the happiest faces, and in your opinion, why?

– There is some world research on happiness done by the Gallup agency. According to that research, the happiest countries are Finland, Iceland, Denmark, Switzerland, the Netherlands – Serbia is only in 46th place. It seems to me that this coincides with the previous experience that I had while traveling. It really maybe because they found harmony between nature and people.

What is the most drastic example of the shrink-back of nature before urbanization that you have captured with your camera?

– I have already mentioned that my opinion is that real urbanization does not harm nature. Nature is being destroyed by poor urbanization and human negligence. Last year in August, while walking by the Reva pond in Krnjača, I noticed the destruction of greenery and a beautiful forest inhabited by a large number of animals, primarily birds, including the white-tailed eagle. I immediately informed my followers on Facebook, about 24,000 of them, but it took almost a year for the news to break. Fortunately, it has been stopped now, but for how long..?

After all, we live in extremely challenging times, people are consumed with daily problems and it is difficult to engage them. What would be the recipe and encouragement for the citizens of Belgrade to start asking themselves and getting involved in the decision-making processes about their neighborhood, city, and the wider environment?

– Power is a fetish. It is something that is adored and believed in endlessly. It’s probably always been that way, and I’m sure it’s been that way since I know of myself. Back in time, we used to believe the newspapers, and now the media influences people’s consciousness indefinitely. So, it is the government that should encourage the citizens of Belgrade and other places to get involved in this issue. However, it is easier for governments to manipulate citizens if they were less aware of the problem. Media with national coverage are the main promoters of such governments, and as long as something does not change in this way, things will get worse and worse. So, the path should probably be like this: make sure national broadcasters and media offices become public services that report professionally and truthfully, instead of now being a propaganda bulletin of the authorities and organizing free elections. When people become aware that there is no progress without education, everything will slowly start to change for the better. Even today, there are informal groups of people here and there who understand the importance of this issue, but these groups have no access to media with national coverage.